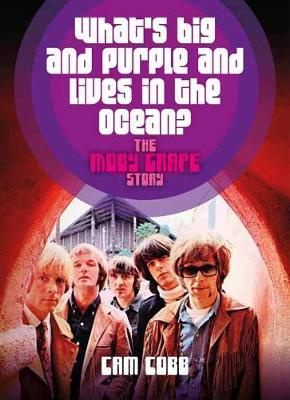 What's Big and Purple and Lives Under the Ocean? (paperback edition)

Moby Grape are a genuine cult phenomenon. Their story, a mixture of myth and truth, is a cautionary tale, a triumph, and a tragedy all at once. Though they are seen as a symbol of 1960s San Francisco, Moby Grape were never actually a part of the city's counterculture movement. Yet they were immersed in it, sharing stages with the likes of Aretha Franklin, Jimi Hendrix, Sly Stone, and many more. Moby Grape's five members came together from very different backgrounds, bursting onto the San Francisco scene in the fall of 1966. With their diverse pedigree, they were nothing less than musical alchemists, yet they were also rebels. Their blending of genres within a tight songwriting framework contrasted sharply with that of many of their SF peers. Following the release of the band s debut album in 1967, you could see everyone from Ringo Starr to Jimi Hendrix sporting a `Moby Grape Now! button. But in the months that followed, they were dogged by mismanagement, bad marketing, a scandalous drug bust, and general rock n roll mayhem. It seemed like it was all over in 1969, but in 1971 Moby Grape staged rock s first full-on reunion. Since then, they have fought to retain ownership of their own name, while two members of the band struggled with homelessness and mental illness. Despite all of this, they produced one of the best albums of the era, and today they are heralded by countless luminaries of rock music and rock criticism, from Robert Plant to Robert Christgau, Tom Waits to Greil Marcus. Drawing on extensive interviews with the surviving members of the band, What s Big and Purple and Lives in the Ocean? finally tells the full story of one of the great cult bands of the 60s.