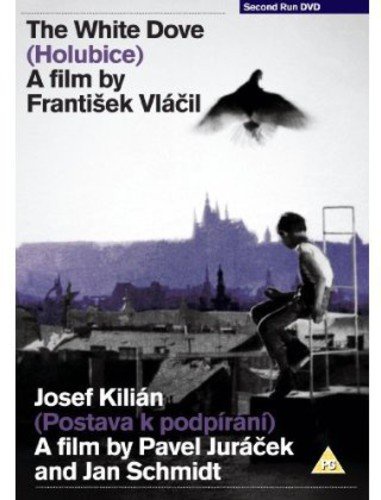 Second Run presents a unique double bill of two early works now regarded as two of the main precursors of the Czechoslovak New Wave. The White Dove is the bold and striking debut feature of master filmmaker Frantisek Vlácil (Marketa Lazarova; The Valley of the Bees). It is a sparse, elegantly composed and stunningly beautiful tale of a wheelchair-bound boy and an artist who inadvertently intercept a homing pigeon and nurse it back to health. Josef Kilián is a dark and absurdly humorous, biting allegory of life under the Communist regime. Author of the screenplays for Daisies, Ikarie XB 1 and A Jester's Tale, yet Pavel Jurácek remains one of the Czech New Wave's most neglected artists. He made only four films, and this surrealist masterpiece - inspired by two icons of Czech literature: the anti-militarist, anti-authoritarian Jaroslav Hasek and the grotesque nightmares of Franz Kafka - was banned forever after the Soviet invasion of 1969.